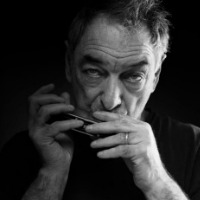 Paul Shapiro’s work has gone through many different creative echelons throughout his prolific career as an artist. galleryFRITZ has the rare opportunity to display examples from each of his major painting decades. Shapiro has truly examined abstraction from various perspectives and he has studied, lived and breathed art for over fifty years. Paul Shapiro continues to be a true painting legend.

Shapiro was born December 26, 1939 in Boston, Massachusetts. He grew up in the Boston area and attended Northeastern University for two years beginning in 1957. Shapiro attempted a major in biology, however he felt art was his true calling. He left Northeastern University and studied painting at The Museum of Fine Arts in Boston until 1962. Paul said, “I walked in, I looked at the student work, and-boom- I knew that was what I was supposed to do. It was one of those rare experiences of alignment. At that moment I officially became a painter.”

After Boston, Paul moved to New Hampshire and continued his painting career. He was inspired by the likes of such museum greats as Paul Klee and Wassily Kandinsky and their abstract landscapes. Shapiro’s landscape paintings were based more on his imagination and feeling than what he really saw. Shapiro said, “New Hampshire’s forms were boring to me- trees, and a lot of green- so I had to look inward and imagine. Then my friend, David Barbero, returned form Santa Fe and informed me, ‘You’re painting New Mexico.’ But I’d never been there!” Shapiro made his first trip to New Mexico in the 1977 and like many artists before him; he was drawn to the picturesque and expansive landscape. Paul relocated permanently to Santa Fe in 1982 and began creating colorful abstract expressionist landscapes inspired by the southwest. Shapiro’s landscape paintings are about the plane of shapes and colors and not the geography. “He confounds aerial and linear perspective through the use of arbitrary color-a sky might be red or a light coral, for instance. A far cliff is a brilliant yellow, whereas, in the foreground, deep purple cliffs recede in shadow. The effect is challenging to the eye and emotions.”

In 1990, Shapiro decided to abandon the landscape subject matter and focus entirely on abstract imagery. Shapiro, also a blues musician, one can’t help but feel musicality in these abstracts. He began using broad and powerful black strokes to fragment other colors and create dramatic lines and forms. These strong abstracts provoke a definite sense of mood and feeling. The paintings could incite a sense of the serene to some viewers and to others possibly the feeling of unrest, almost like a blues song. According to Paul, “And my (painting) is very musical. It’s who I am. This is who I am.”

Around the late 1990’s, Paul Shapiro delved into creating abstract mixed media collages. Shapiro explains his collages, “Space would become highly shocked. And with the introduction of these ‘shocks’, and because I was using different and disparate components-hard edges, soft edges, curved lines, straight lines, and windows- new spatial and structural situations would occur.”  His investigations into collage led to an even deeper understanding of abstraction, Shapiro was able to play on multiple dimensions and surfaces. The broad, black strokes were still there, but more of a spatial dance was created.

We are most likely to accept offers less than 10%.

You will receive an email confirmation